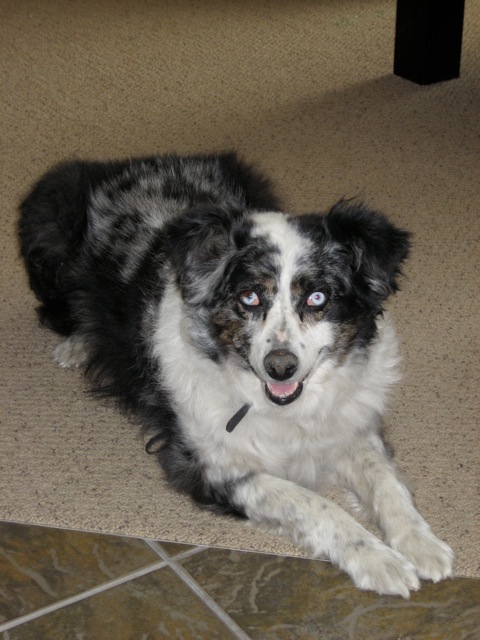 We lost a family member last week  — Sydney, my daughter, Gillian’s, dog.  Sydney, an Australian Shepherd, was 12 years old – the average life span for a medium-sized dog.  It makes you wonder why dogs aren’t allotted a longer lifespan.  Why aren’t they allowed the longevity of elephants, which live to approximately 80?  That age would bring them in line with their owners.  Instead, dog lovers easily go through 5 or 6 dogs from birth to grave.Sydney woke up last Thursday morning her usual self, but after her morning pee it was obvious that something had gone wrong. While she was outside she had some sort of attack and would never run again.  A visit to the vet showed internal bleeding caused by a large tumour on her small intestine.  Gill sat with Sydney’s head in her lap as she slid into her final sleep.  Sad days ahead.

Why is there a love affair between humans and dogs?   I think it’s because dogs offer unconditional love.  You can get angry with them and they won’t hold a grudge.  They will slink off with their tail between their legs but when you call they run back to lick your hand.  All is forgiven. 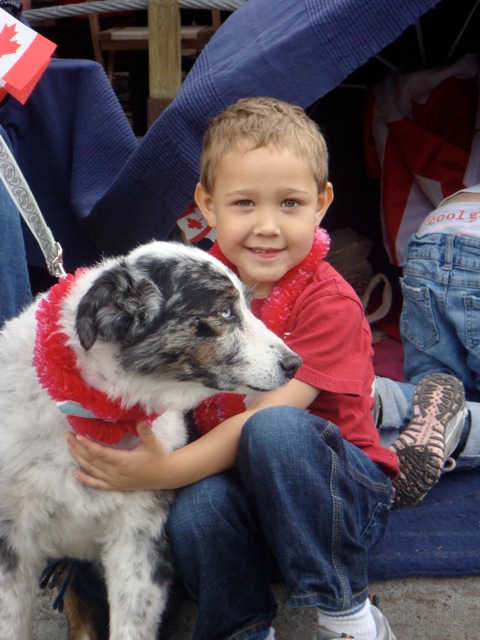 It is interesting to see a dog suffer embarrassment.  Sydney had a number of run-ins with skunks.  After her first spraying each succeeding incident seemed to cause her chagrin.  “I can’t believe I fell for that again!”

The biggest trauma in Sydney’s life was when she was playing fetch the stick and ended with it lodged in her throat.  The stick became impaled in the ground and Sydney lunged after it.  Her yipes of pained surprise were heart breaking to hear.  For many months after splinters caused puss-filled blisters to form in her throat.  Many visits and many dollars later it was determined no more stick games.  Even up to the time of her death Sydney would occasionally drop a stick at your feet and look up at you hopefully.  “No way, Jose.”

Throughout most of her life Sydney didn’t seem to realize that she was a dog.  She would give most dogs barely a passing glance.  Especially small dogs.  Three years before her death Sydney started to show the signs of her advancing years.  She was less tolerant of the children in the family.  As a young dog she loved going out in all weather but as she aged she avoided the cold.  And when she got up after her naps she was stiff and slow moving.  Gill decided it was time to get another dog.  This over-lapping is a common practice among dog lovers.  The old dog teaches the new dog the rules of the household.

Panda, another shepherd, looks like the Red Panda hence his name.  Panda was a little over a year old when Gill brought her home from the Humane Society.  She had been abused as a pup and was untrusting and skittish, especially of men.  Also, she had some bad habits such as jumping up on the couches and even the dining room table.  It didn’t take her long to realize those behaviours were a ‘no, no.’

Right off the bat Sydney and Panda hit it off and became the best buddies.  Sydney was the steady, loving mother that Panda seemed to need.  And Panda gave Sydney a whole new lease on life. The two dogs became inseparable and Sydney seemed to regain her youth.

Before Panda arrived Sydney would not leave the property.  Unfortunately the two dogs were soon wondering far a field.  Gill had to fence the property to keep them at home.  One of their favourite pass times was to go tearing across the fields after the gophers.  Sometimes they would tease the horses when there was nothing else to go after.  And they never learned to give the skunks that took residence under the blue shed, the wide berth that they demanded.  I wasn’t surprised that Sydney forgot, from one time to the next, to leave the skunk alone, as she couldn’t smell them.  After her stick incident she seemed to loose her keen sense of smell.  Panda on the other hand had no such excuse.  Surely the smell alone would be enough to make her stay away from the cranky creatures.  But no, time-after-time one or the other would come home reeking of skunk perfume.

Even with the sadness that comes from losing a best friend after only a hand-full of years together, man will continue to seek the companionship of dogs. Nothing is more rewarding than to have a dog wait for your return and then greet you with exuberance whether you have been gone for an hour or a day.