Warning: Use of undefined constant ddsg_language - assumed 'ddsg_language' (this will throw an Error in a future version of PHP) in /home/vikitrav/public_html/wp-content/plugins/sitemap-generator/sitemap-generator.php on line 44
 Hello from Merida, Yucatan | Вики-трэвел 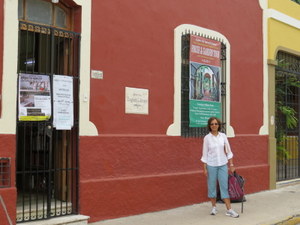 We arrived here a week ago and I am still adjusting to the heat and humidity. Especially the humidity.

We are happy with the house we have rented. The Mexican architecture is completely different from what we are used to. What I love the most is the blank facade that faces the street with no hint of what is behind the doors. Every home has a hidden court yard – ours is between the front bedroom and the rear bedroom. If it is raining you have to walk through the rain to get to the rear bedroom. Also, a third of our kitchen has an open roof so that when it rains it rains in the house. If you need to get to the bathroom and the bedrooms you walk through the rain. It is really kind of cool.

Here is the link to our rental. It is called Casa Laura.

If that doesn’t work google ‘Casa Laura, Merida’. (It is the one that says, Historic Home in the Historic Centre of Merida.)

The couple we are renting from are Americans and they have two places. One here in the city and one at the beach community of Progreso. 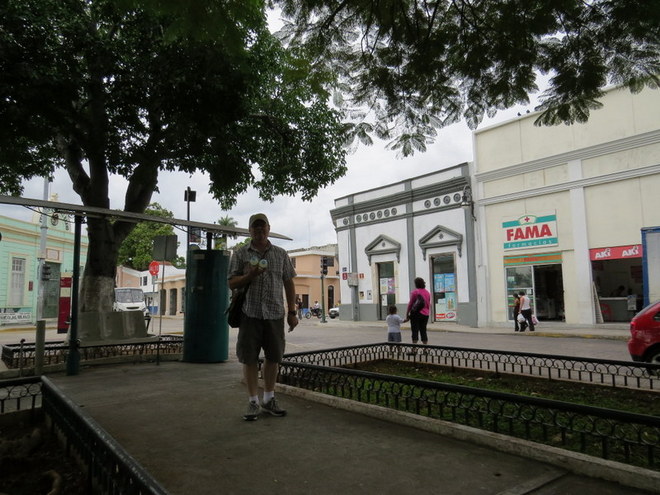 There is a large English speaking (expat) community here in Merida. The English Speaking Library is the centre of the community. They offer many social activities that allow people to congregate and get to know one another. At least 3 Saturdays a month they have a guest speaker, on such topics as:
House renovations in Merida,Immigration laws, etc. These talks are offered free of charge. 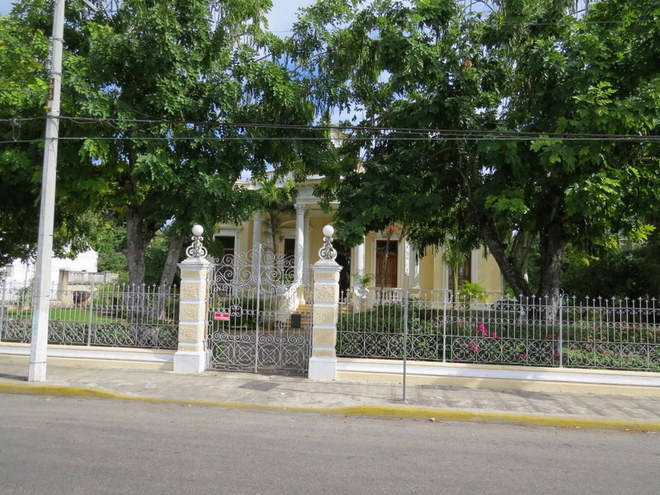 Once a month the library offers tours of some of the local houses so that you can see what is behind the gates and fences. The cost is $200 pesos or $16. Cdn. Every Monday there is a session called, Conversation with Friends, where both Mexicans and English speaking expats come together to practice each other’s language. And lastly, they have a social night called, MEL-O Nites, with a cash bar and snacks for people to just hang out and have a good time. Don and I plan to try it all. Maybe we’ll gain some new buddies. 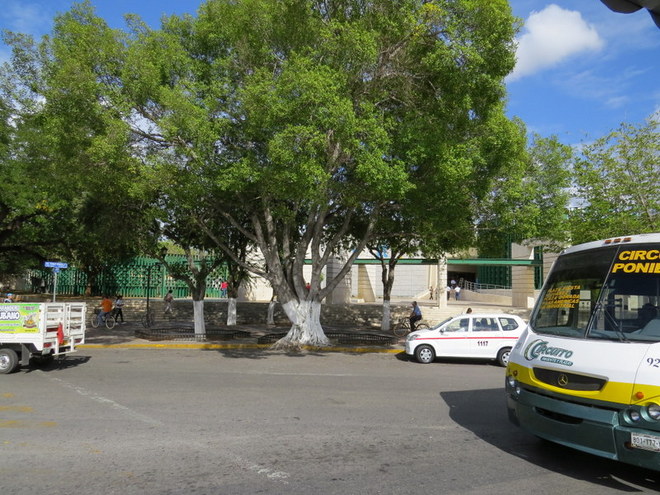 Merida is an incredibly social place. There is always something going on. Each burrough has a park and on any given night of the week you can be assured that there is music being played live in one of the parks. Often the music is accompanied by singers and/or folk dancers. However, the big weekly event takes place in the Main Plaza. This plaza was the location of the Mayan city of T’ho. when the Spaniards ‘founded’ Merida. The city of T’ho was easily conquered by the Spaniards who dismantled all the pyramids and used the huge stones as the foundation for one of their many cathedrals. But that is another story. 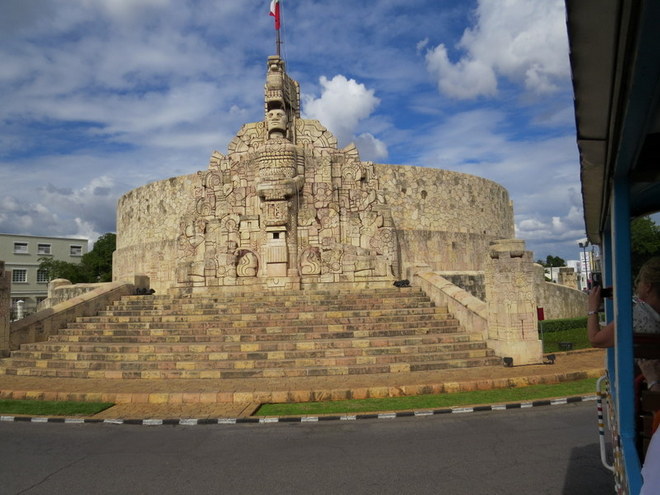 Every Saturday and Sunday there is a huge party in the central square. 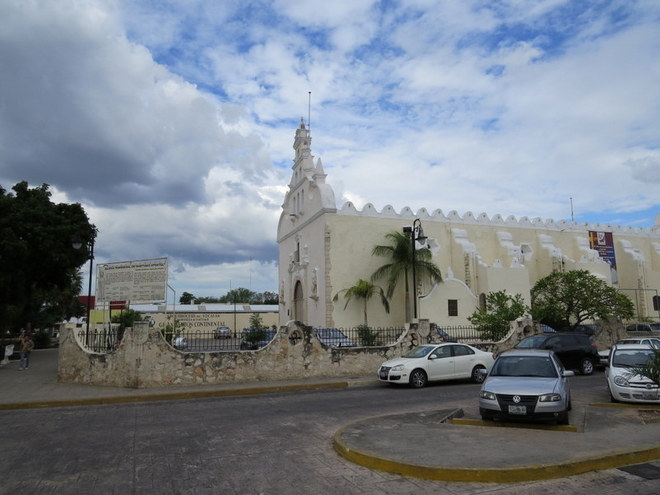 Sunday, especially, is a spectacular tradition in Merida (Merida En Domingo). The streets around the Plaza Grande are closed to traffic and the area is transformed into a shopping area, with side-walk cafés, and stages erected for the different bands that perform throughout the day.

In the shopping booths you can find huipiles, guayaberas, honey, dolls, bags, tee-shirts and more. Everything is made for sale by the local people of Yucatan. The outer ring of booths sell food, such as marquesitas, tacos, cochinitas, ice cream (try the coconut), fruit, drinks, etc.

If the crowd starts to get to you, wander up Calle 60 to Santa Lucia Park. At Calle 55, you can find antiques, old books and other curiosities. At that lovely park, there is also live music, lots of dancing, and more great food. 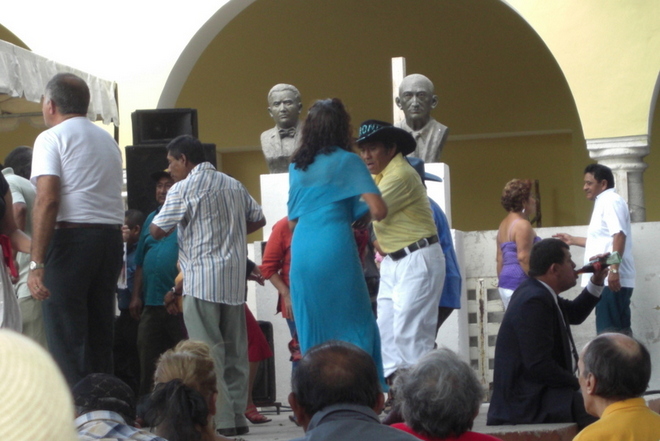 What is the most amazing thing is that they don’t do this once a year, or once a month, but once a week. Amazing! 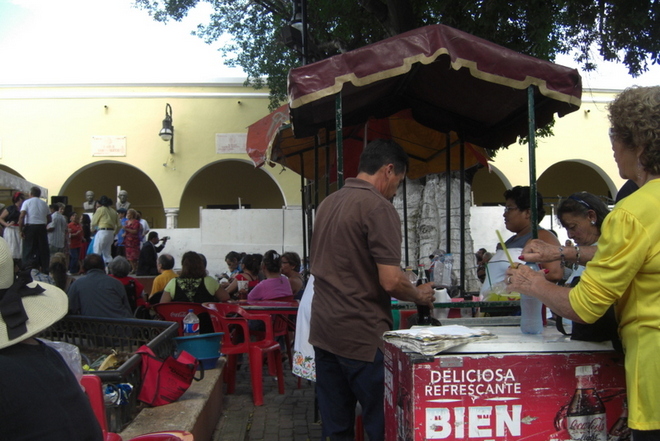 We will be in Merida for three months. During that time we will continue to get to know the city and it’s people. Plus pick up a few useful Spanish phrases. Especially useful is the ability to understand the prices that are quoted when you are haggling with the vendors. We will also venture out of the city to explore the ruins that dot the Yucatan Peninsula. In retrospect three months just may not be long enough.