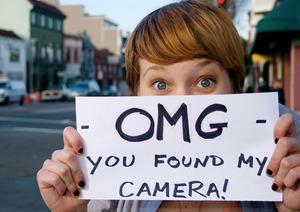 On my last trip, I lost my camera. Actually it was stolen and I knew who took it, but it was her word against mine. So what do you do?
It happened on the Croatian island of Hvar. I had my camera in my hand when I went into this cute little jewellery shop. I wondered around and picked out a green natural-stone bracelet. I must have set my camera down on the counter to pay. I discovered I didn’t have enough cash. I told her I would be right back. I stepped out of the store to ask Don if he had some cash. He was down at the end of the alley so I was out of sight of the store for a minute or two. I went back in and paid and left with my bracelet, but without my camera. This I didn’t discover until ten minutes later. When I returned to the shop to ask for the camera the clerk stated that she hadn’t seen it. “In a pig’s eye!!”

What was particularly galling was that this was the second camera I lost while travelling. I lost the first one in Madrid. It was the last day of a 3 week trip, taking in most of Spain. We were on a Hop-On-Hop-Off bus. I never knew exactly how that one went missing. Did someone lift it out of my bag? Or did I place it down on the seat beside me? I will never know, but when I went to grab it for a picture it was gone. The unfortunate thing about losing that camera was that I had unwisely neglected to download my pictures. I not only lost the camera, but all the pictures from that trip.

I can’t be the only person to lose their electronics. I’m sure that cell phones must go missing all the time. The fact that people carry them in their hands must make them a particular target for misplacement or theft.

One of the most annoying aspects of losing a camera is that it has to be replaced. Not only is the added expense a regret, but the decision as to what to buy. From season to season the cameras change so dramatically that it is impossible to buy the very same camera that went missing. At the very least the number of pixels has increased. Although that’snot a bad thing.

To replace the camera that the shop girl kept as a ‘tip’, I decided to buy a camera with more features.I wanted a camera with the capability of taking clear, long-range pictures. But I didn’t want a SLR with the need to carry and change lenses.
Even ruling out an SLR the selection was vast — all the different lines, each with a dazzling array of features.

I have a friend, a professional photographer for over 35 years, who swears by Canon. That placed Canon at the top of my list.

I did online research plus went into various camera shops and talked to their staff. As a result I added Panasonic and Nikon to my list.

After this process, which took me a week and a half, I was down to two cameras, the Canon Powershot SX50 HS and the Nikon Coolpix P510. When I went into the Future Shop to buy the camera I still didn’t know which camera I would walk out of the store with. The deciding factor was the sales person. He talked about the difference in the two companies and how the cameras are manufactured. I bought the Canon SX50Hs. Would I have been as happy with the Nikon Coolpix P510? Probably.