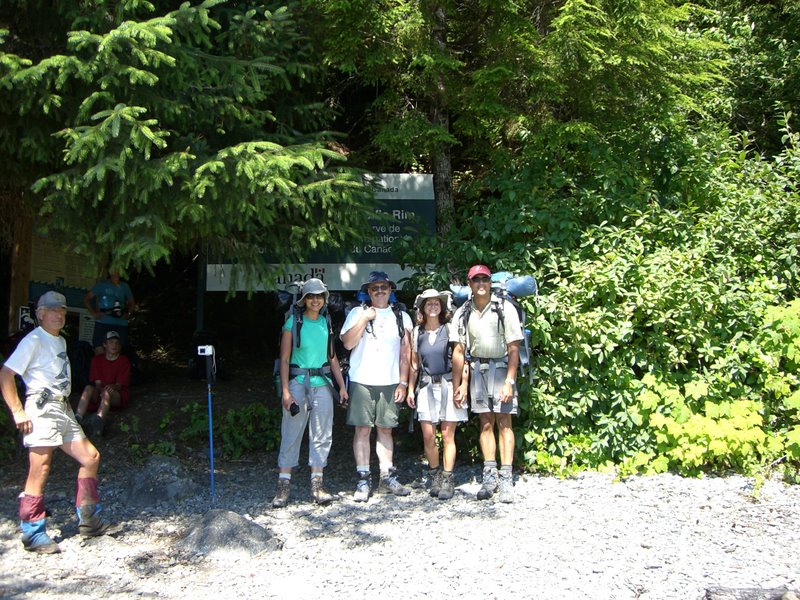 This story will sound implausible and unbelievable but trust me every word is true.

In June 2006 my husband, Don, son, Steve, daughter-n-law, Julia and I hiked the West Coast Trail.

The West Coast Trail, a challenging 77 km hike between Port Renfrew and Bamfield, on Vancouver Island, is one of the most popular trails in the world.  So much so, that you have to reserve your hike up to 3 months in advance.

The West Coast Tail started as the result of a shipwreck, January 22, 1906. The SS Valencia, a 77 meter vessel, ran aground just north of Klanawa River on Vancouver Island’s west coast. Many of the people survived the wreck but perished once on land.  The wild and rugged shoreline, bordered by a temperate rain forest, defied efforts to reach habitation and all 126 passengers were lost. This tragic event spurred the government to construct a trail between Port Renfrew and Bamfield against future shipwrecks as this section of the Pacific had been the site of more than 60 ships lost since 1854.

The present West Coast trail generally follows the route of the historic life saving trail. A heavy wet climate has produced a dense forest of cedar, hemlock, fir and spruce. The forest floor is jammed with salmonberry, huckleberry, salal, and in places, the heavy, spiked stalks of devil’s club.  To hike the entire trail takes 6 to 10 days. 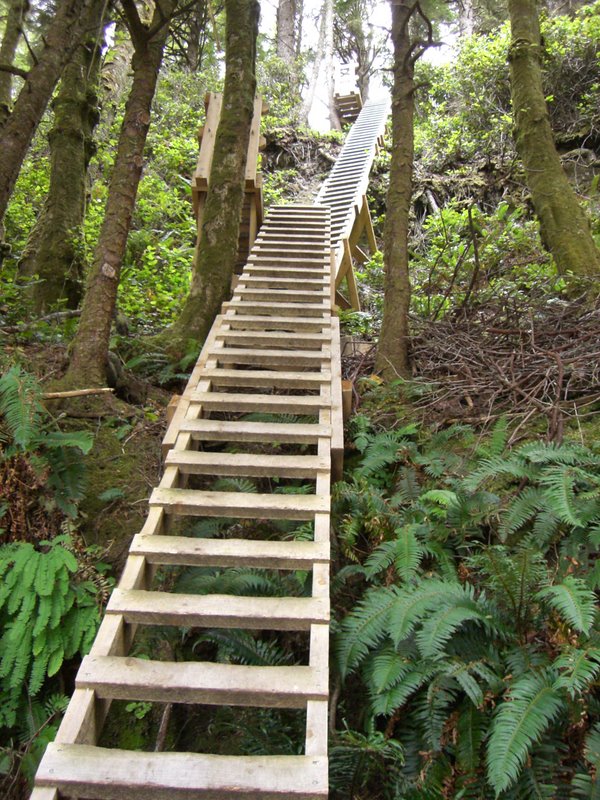 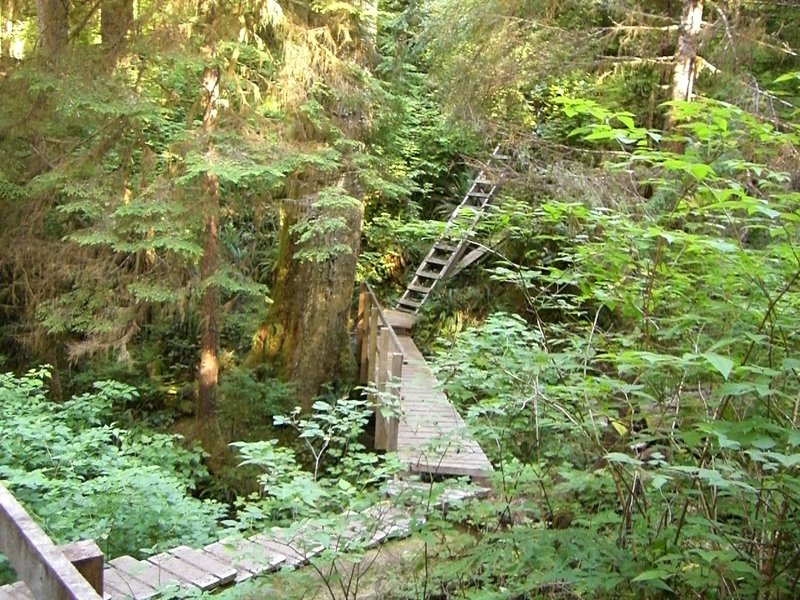 My story starts at the end of our 3rd day.  The trail traverses all types of terrain but most of it is wet and muddy.  Parts of the trail are dissected by streams; some you can jump most you can not.  When we would encounter a wide expanse of water Don, Julia and I would take off our boots and wade through in barefoot.  Steve, having worked in the Forestry industry, mainly fighting forest fires, would just plow right though. 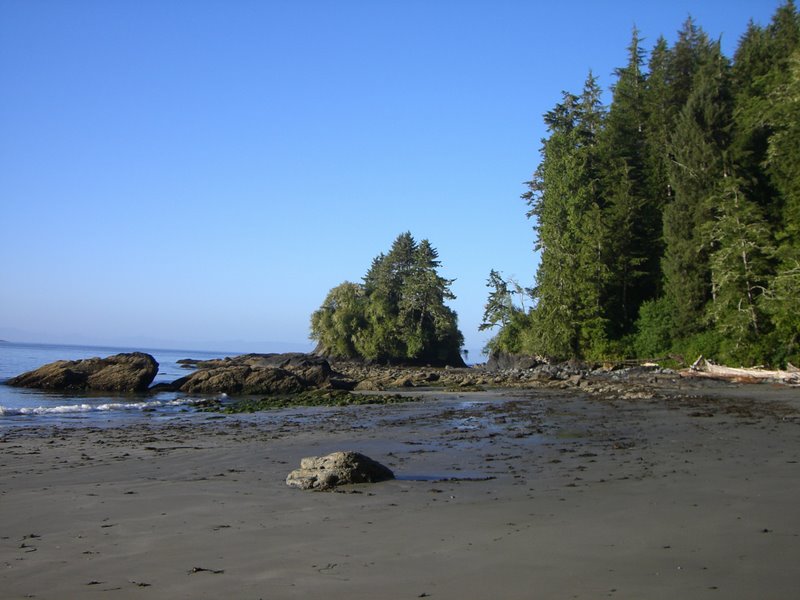 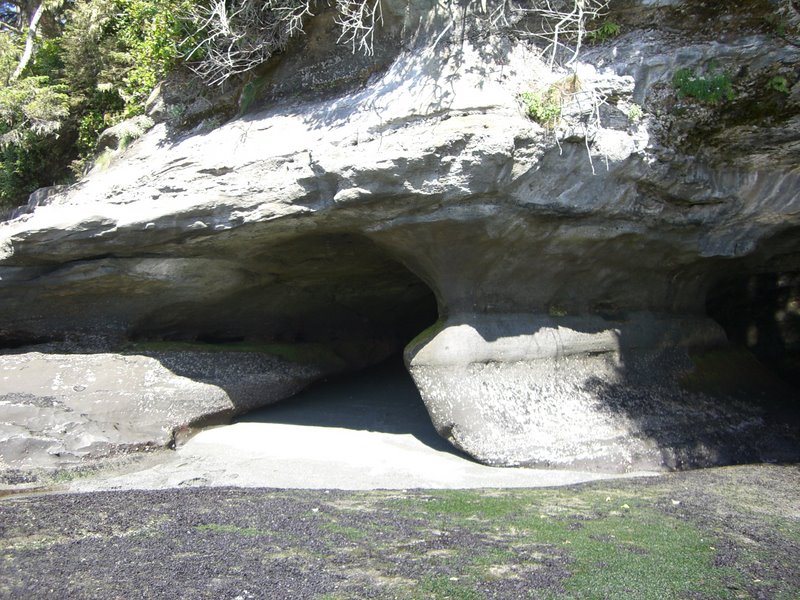 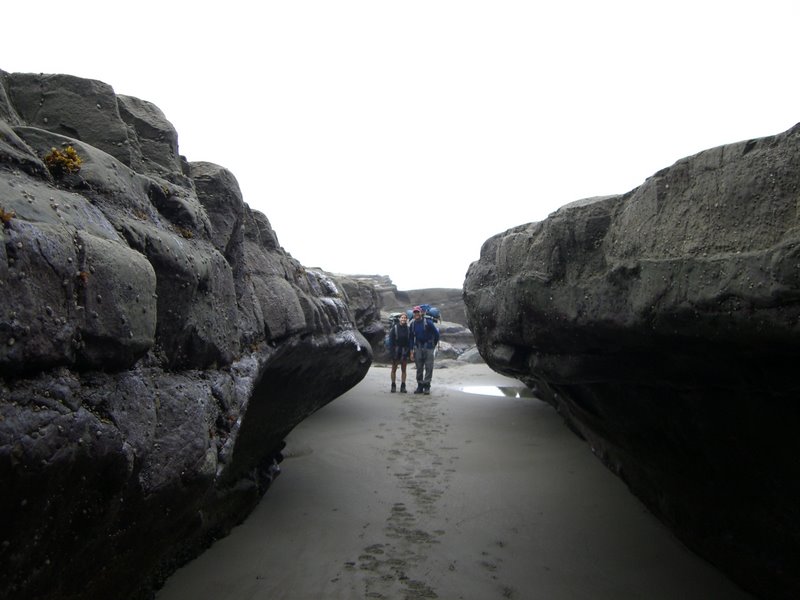 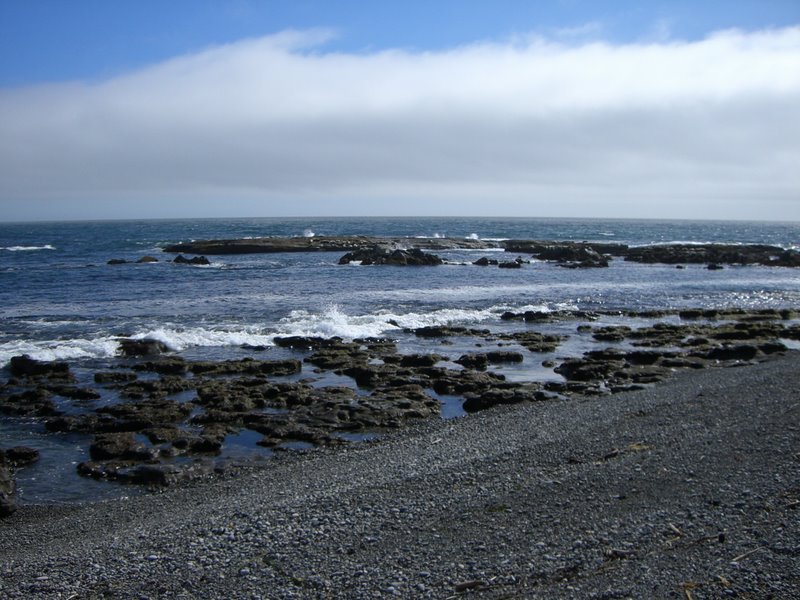 By the time we stopped to erect our tents and build a fire Steve’s boots were wet.  He would set them near the fire in an effort to dry them out. 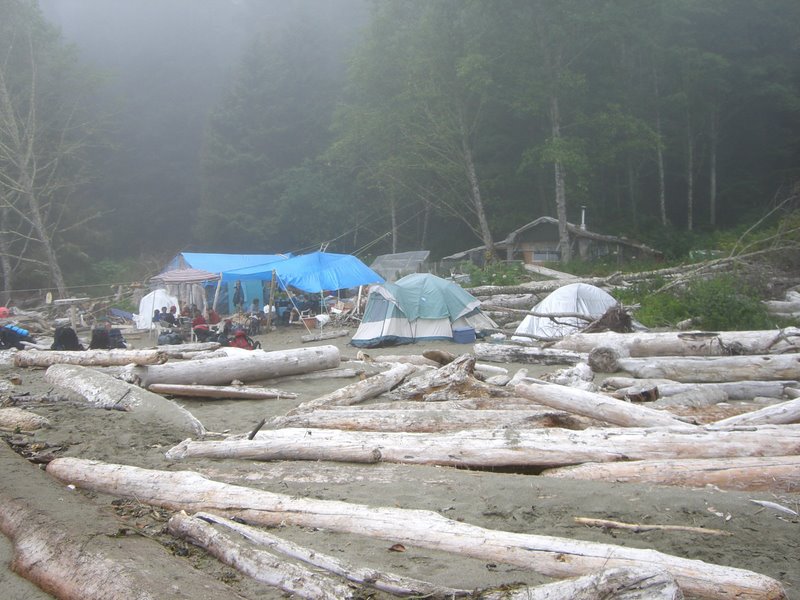 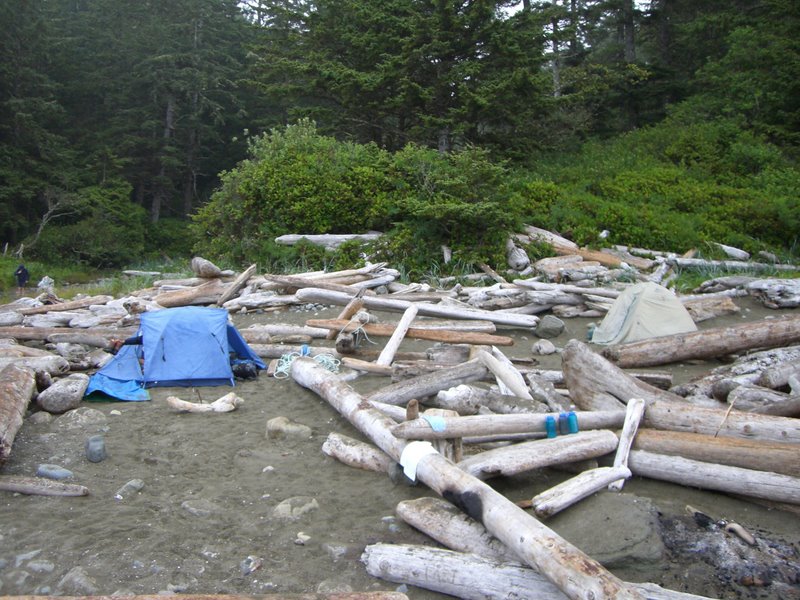 On our third night we camped in an area strewn with huge boulders.   We built our fire in a bowl created by a natural grouping of large rocks that bore evidence of many campers who had passed that way.  The rock that Steve chose to dry his boots on was already warm from the adjacent fire.   It wasn’t long, however, before we smelled burnt rubber.

“Steve, your boots,” shouted Julia.  He snatched them off but it was too late.  The back of the heel of his right boot had melted from the heat.  Brand new, $200 hiking boots were now burnt rubber. Steve tried to reform the boot cuff to its former shape before it cooled.

Next day it was soon apparent that the boot was ruined and that Steve would not be able to hike out in it.  After only half hour into our daily quota of 11 kilometers he had to take the boot off as walking in it was excruciating.  We sat down to discuss the options.   We told him there was no way he could finish the hike with the boot.  His only choice was to make it to the next location where a boat could possibly take him off the trail. 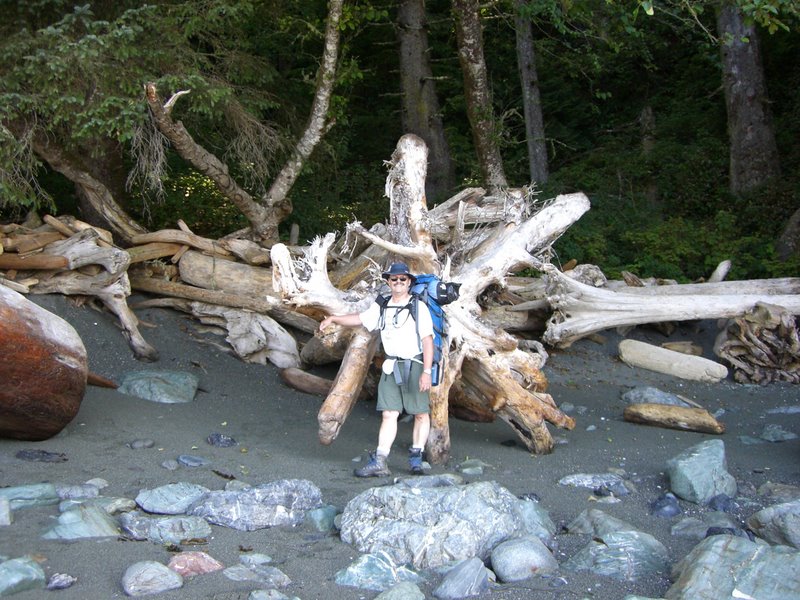 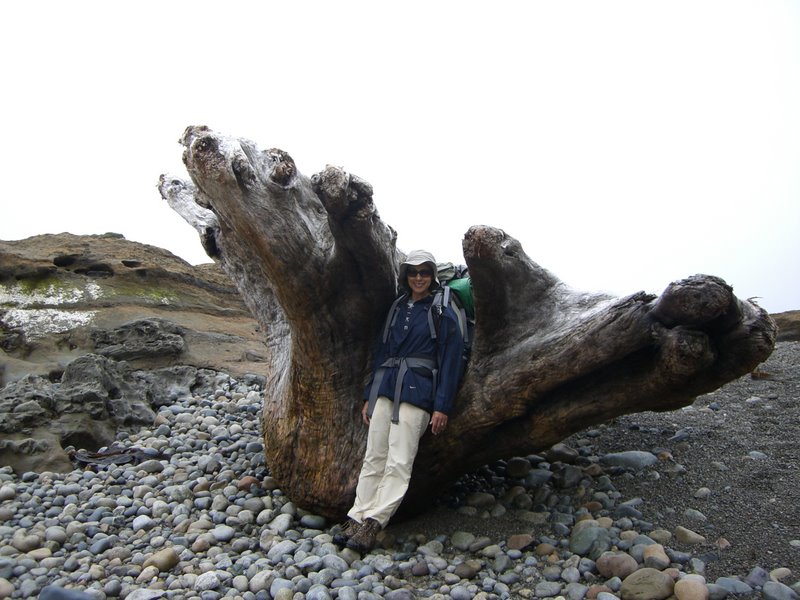 Steve wasn’t ready yet to give up.  He said he could hike in his camp ‘booties’, which would be akin to hiking barefoot as they are thin nylon down-filled slippers.  We were all worried because we knew that he could not make the last 44 kilometers without a sound right boot.  Absolutely no way! 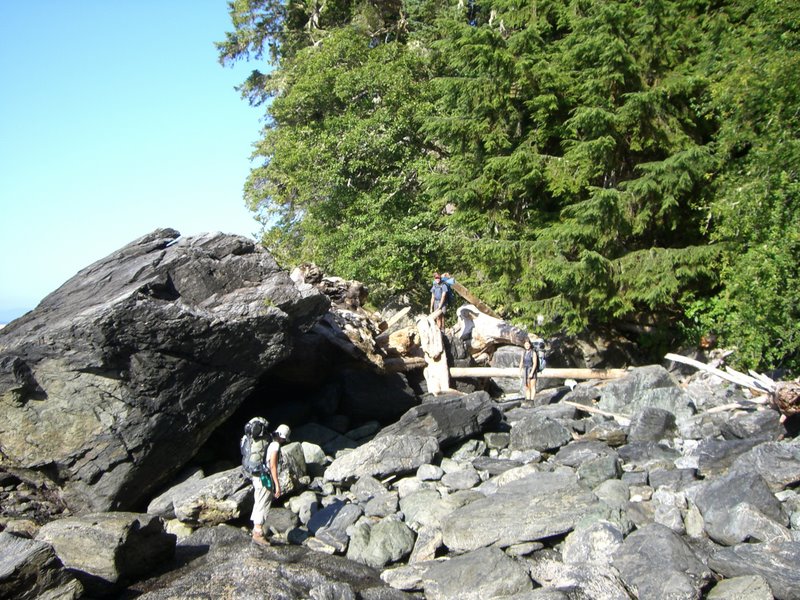 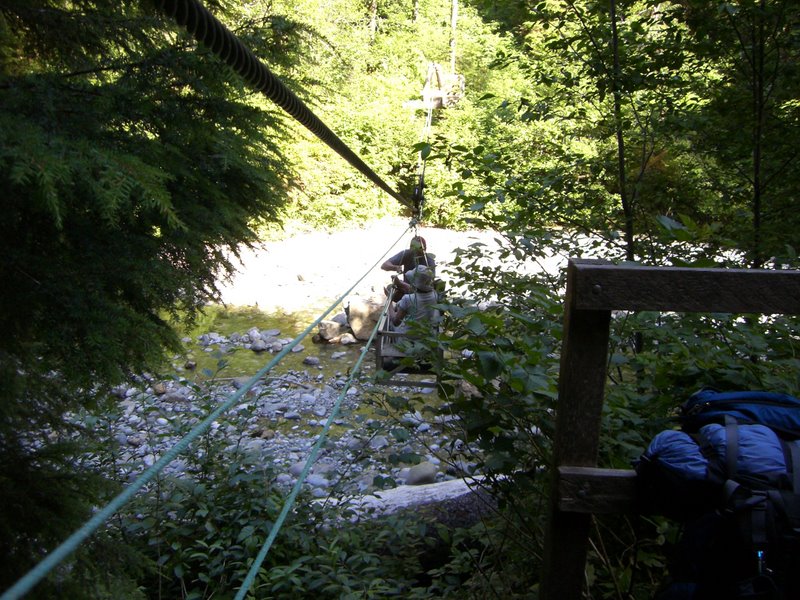 Steve bravely set out with his left foot encased in his sound left boot, but his right foot all but bare.  One false step on an exposed root and he would break his foot.  Even with his handicap Steve insisted on maintaining the hiking order.  He led, Julia was next, I was third and Don brought up the rear.  Soon Steve and Julia were out of sight around a bend or two.  Steve was too determined to let a little thing like a bootless foot slow him down. 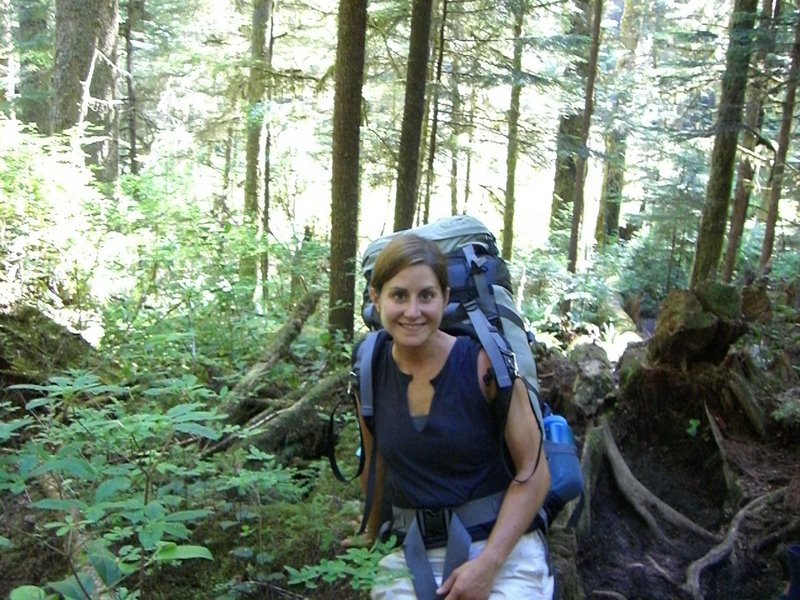 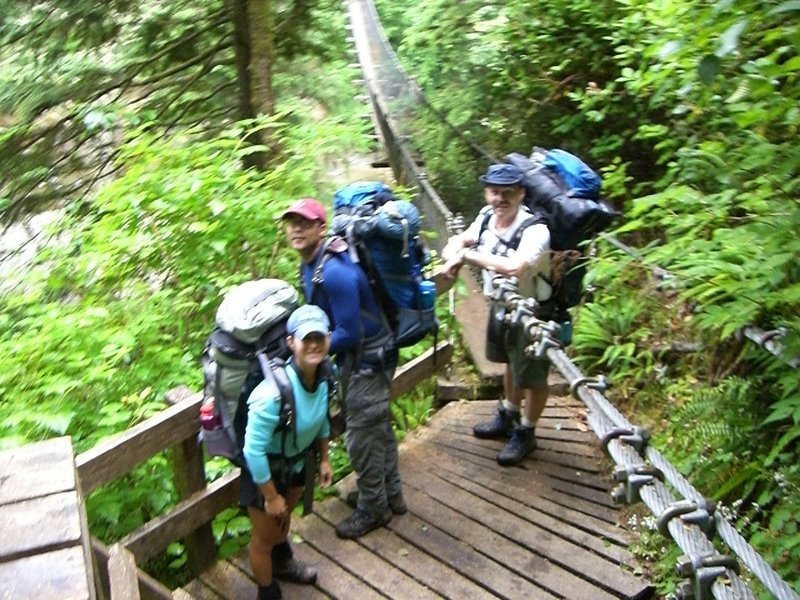 After awhile Don and I rounded a bend and there they both stood looking at an object that Julia held in her hand.  It was an old boot. The kind of boot a forestry labourer would wear.  True it was old, with some leaves and twigs tucked inside, but it was a boot for the right foot and it looked to be Steve’s size. 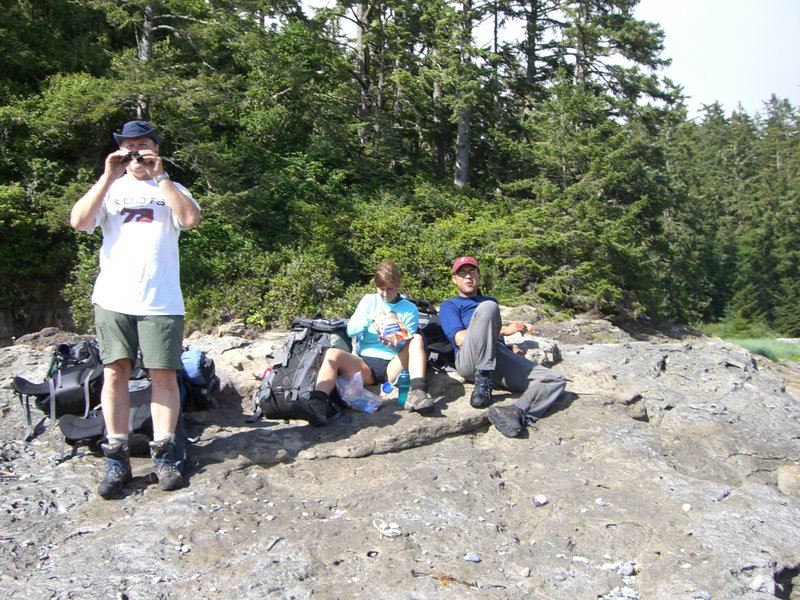 Initially Steve said no way was he putting his foot in that dirty old boot despite Julia’s urgings.  Julia cleaned out the boot and soon had Steve convinced that it was worth a try.  What did he have to loose?

Steve put on the boot and found it to be a perfect fit.  The laces were sound and for having been out in the elements it was in overall, good shape.  Steve hiked the rest of the trail on that boot and at the end stated that it was more comfortable than his expensive Merrells.

We were all baffled by the coincidence.  How did the boot come to be lying right in the middle of the path to be found by someone who just happened to need a size 8 ? right-foot boot?

Steve had a theory. He said that the boot had been placed there by his beloved grandfather who had died in 1997.  He said, “Grandpa knew that Stevie needed a boot and placed it there for me.”

Gill, his sister, who is spiritual, had another theory.  She said that in another life or even in a parallel existence Steve placed the boot there himself knowing that he was going to need it.  Others have offered the opinion that it was pure serendipity.

All I can say is that there is more to the universe than meets the eye and despite the advances that have been made in our world throughout history there will be realms that will forever remain a mystery.